To share your memory on the wall of Rita Perreault, sign in using one of the following options:

Born and educated in Cohoes, she was the daughter of the late Henry and Irene Drogue Grignon. She ... Read More
WATERFORD Rita M. Perreault, 92, of First St. entered into eternal life Friday, Mar. 19, 2021 at her home surrounded by her loving family.

Born and educated in Cohoes, she was the daughter of the late Henry and Irene Drogue Grignon. She worked at Standard Manufacturing for many years and prior to that had been employed at Fort Orange Manufacturing.

Rita was a past member of the Halfmoon Waterford Fire Dept. Ladies Auxiliary, a former member of the Red Hat Society and also a communicant of the Church of the Holy Trinity in Cohoes. She enjoyed taking trips to the casino, playing bingo and especially loved bowling having belonged to the Senior Bowling League in Clifton Park.

Rita was the wife of the late Frank Perreault and former wife of the late Armand McMahon; the loving mother of Earl McMahon (Janice) of Waterford, Brian McMahon (Cathy) of Clifton Park and Mary Lou Charbonneau (Joe) of Waterford; the sister of Lillian Peak of Cohoes and Diane Petersen of Vermont and the late, Nelson Grignon, Elizabeth Gamache, Blanche Barsey, Henry and Clement Grignon. She is also survived by her grandchildren, Earl McMahon, Jr., Todd McMahon and Brian McMahon Jr., Joseph Charbonneau Jr., John Charbonneau, Shaun McMahon, James Charbonneau and Christian McMahon, Sam Price and Addie Peet as well as 13 great grandchildren and many nieces and nephews.

Funeral services will be held privately at the convenience of the family. Burial will take place in St. Mary’s Cemetery, Waterford.

Receive notifications about information and event scheduling for Rita

We encourage you to share your most beloved memories of Rita here, so that the family and other loved ones can always see it. You can upload cherished photographs, or share your favorite stories, and can even comment on those shared by others.

Anne Marie and Gamache and Wertman Families sent flowers to the family of Rita M. Perreault (Grignon).
Show you care by sending flowers

Posted Mar 29, 2021 at 04:09pm
To my cousins Earl, Brian and Mary Lou, my heart felt condolences in your time of grief.
I wish there wasn't as much distance between us now and I could be with you in this hour of need.
Rest in peace Aunt Rita.
Comment Share
Share via:
GK

Posted Mar 23, 2021 at 06:20pm
Rita and I have been friends for over 60 years. We had a lot of good times together. She was one I could confide in and talk and laugh together about life.
I'm missing her and always will.

Posted Mar 23, 2021 at 04:26pm
I am so sorry to hear of Rita's passing. She was a kind and caring person. After her marriage to my Uncle Frank, we became good friends. Rest In Peace, Rita and fly with the angels.
Barbara Hines
Comment Share
Share via:
AM

Posted Mar 22, 2021 at 07:30pm
Marylou , from the bottom of my heart joe and I are so sorry to hear about Rita , she was a dear friend and I loved her , are cups of tea together and inviting her to dinner when she lived next store to us , I’m sorry I didn’t keep in touch better , we are sorry for your loss. Marge and joe Landor
Comment Share
Share via: 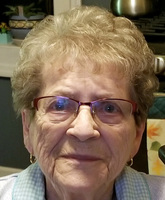