To share your memory on the wall of Merle Doud, sign in using one of the following options:

Merle was born in Boonville to Henry and Clara Beals Doud. At a young age he enlisted in the U... Read More
WATERFORD Merle H. Doud, 97, formerly of South St. entered into eternal life Wednesday, Nov. 25, 2020 at St. Elizabeth’s Hospital in Utica.

Merle was born in Boonville to Henry and Clara Beals Doud. At a young age he enlisted in the US Army Air Corps and served in the European Theatre during WW II where he attained the rank of Tech. Sergeant. Returning home after the war, on June 26, 1948 he married the love of his life Catherine Johnson Doud. Together they moved to Waterford in 1954 where they raised their family and became an integral part of the community.

Merle worked as a lab technician at GE Silicones in Waterford for 40 years until his retirement in 1992. He served on and was a past president of the Waterford Halfmoon Board of Education and was a former Village Trustee. Always a history buff, he was the former Waterford Village Historian and past president of the Waterford Museum & Cultural Center. He was a member of the Friends of the Mohawk Towpath Byway. He also belonged to the Apollo-King Solomon’s Masonic Lodge #13 in Troy for over 60 years.

Merle was known for his love of traveling and camping. Over the years he and his wife drove across the country 8 times. He also loved the theater. He performed, directed and supported the arts throughout his life.

Faith was always an important part of Merle’s life. He has been a longtime member of the Living Hope United Methodist Church in Waterford where he served in many capacities including Church Lay Leader and past president of the United Methodist Men.

In addition to his beloved wife of 71 years Catherine, Merle is survived by his loving daughters, Carolyn E. Doud (Jonathan D. Pierce) and Janet E. Doud all of Albany as well as several nieces and nephews. He was also predeceased by a sister, Virginia Rieben.

Funeral services will be Friday at 10 a.m. at the Philip J. Brendese Funeral Home, 133 Broad St., Waterford and at 10:30 a.m. at the Living Hope United Methodist Church in Waterford. Interment will follow at the Gerald BH Solomon Saratoga National Cemetery, Schuylerville.

Relatives and friends may visit at the funeral home Thursday from 4-7 p.m. Masks will be required and social distancing regulations observed.

Receive notifications about information and event scheduling for Merle

We encourage you to share your most beloved memories of Merle here, so that the family and other loved ones can always see it. You can upload cherished photographs, or share your favorite stories, and can even comment on those shared by others.

Mary and Mallory and Lori Pincher sent flowers to the family of Merle H. Doud.
Show you care by sending flowers

Posted Jan 08, 2021 at 04:22pm
We're sorry to hear of Merle's passing. When we moved to Waterford thirty four years ago, he and Catherine were very kind to us and helped us become familiar with the community. We were their guests at the Museum Christmas party that year. Whenever we met them, they were happy to visit. For those things we will always remember and be grateful. Wally and Karen Haley.
Comment Share
Share via:
MM

Mary and Mallory purchased flowers and planted a memorial tree for the family of Merle Doud. Send Flowers

Posted Dec 01, 2020 at 07:48pm
Janet & Carolyn, I pray the love of God embraces you during your journey through grief. Your dad was amazing! Peace, Blessings & Love, Lori Pincher

Posted Dec 01, 2020 at 11:17am
It was my honor to be Merle's pastor for a brief time in Waterford when we celebrated the 200th anniversary of the church and our community Thanksgiving service. Merle's love of the history of the community and the church was of great help in planning these events. But what I remember most was his humility, his sense of humor and one of the kindest and most gentle spirits I have had the pleasure of knowing. Together with Catherine they extended the love of Christ to those who came to worship with us at our church that became Living Hope UMC. "Well done good and faithful servant..." In Christ's love, Pastor Joyce
Comment Share
Share via:
PB

Posted Dec 01, 2020 at 10:51am
Merles faith was like this tree. The roots of it drew deep into the soil and its branches grew high reaching up to heaven. Grace & peace 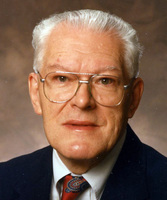