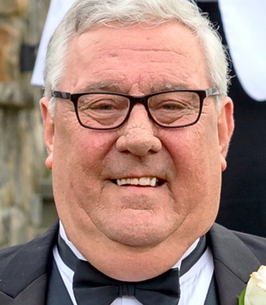 William “Liam” Cahill, 72, of Waterford, NY entered into eternal rest on May 6, 2022, in Boston, MA after a long battle with cancer. Liam was born on May 13, 1949, in Knockanes, Carron, County Clare, Ireland. He was predeceased by his parents Thomas Cahill and Maureen Cahill (née O’Bryen), and his brothers Thomas (TJ), James (Jimo), and Sean.

He is survived by his wife Molly Cahill, daughter Bridget (Ricky) Thumar, and sister Kay Noonan. Liam has many nieces and nephews in the U.S. and Ireland. While deeply proud of his Irish ancestry, Liam was equally proud of attaining his U.S. citizenship in 1998.

Liam was a very successful entrepreneur, both in Ireland and the U.S. In Ireland, he operated a private tour company – Liam Cahill Tours of Ireland. Fodor’s Guide to Ireland listed him as the best private tour guide in Ireland. In the U.S., he owned and operated Odorite of New York for over 30 years, servicing many businesses in the Capital District and forging lifelong friendships.

Cape Cod, MA was a second home to Liam, travelling there often since the 1980s. He developed a whole family of friends there because of his association with the Irish Village and being a member of the Sons of Erin of Yarmouth. He was by far the biggest fan and promotor of the Irish Village.

Liam loved to play golf and was a member of the Van Schaick Island Country Club in Cohoes, NY. It was not the score of the game that was important to Liam, but rather the social aspect and meeting new and old friends along the way.

Liam was the ultimate fundraiser over his lifetime. He supported Father Jim Hayes for years, raising money for the Doors of Hope in Ireland by bringing the band the Wolf Tones to Albany, NY. He supported his daughter’s school, St. Mary’s School in Waterford, by organizing raffles throughout the years. He was instrumental in planning golf tournaments, including some of his favorites at the Irish Village, and running the raffle so that charitable benefactors received the greatest funds possible from participants.

Liam became involved in his community immediately after moving from Ireland to the U.S. All you had to do was tell Liam you needed something, and he would deliver hundredfold. He was part of chartering a Kiwanis Club in Clifton Park, NY which benefited many other organizations. Liam was a member and officer of the Albany Ancient Order of Hibernians (AOH) and was also a member of the Watervliet AOH. He was a member of the Emerald Club, the Post 235 Sons of the American Legion, the Cohoes-Waterford Elks, and the Troy Boat Club. He was a social member of the Veterans of Lansingburgh, as well as the Ukrainian-American Club.

Liam enjoyed traveling with his wife and daughter to Ireland, England, Canada, and Mexico. He especially loved cruising and explored most Caribbean countries, Central America, and South America. Liam lived life to the fullest and was a social butterfly. He had an infectious laugh and sense of humor and could always find a way to make you smile. He loved his wife and daughter more than anything in this world. His family is comforted by the outpouring of support from all of the friends and special people in his life, both near and far. He will be incredibly missed by all.

In lieu of flowers, gifts may be made to Dana-Farber Cancer Institute in memory of Liam Cahill to support cancer research and patient care via his Giving Page at:
http://danafarber.jimmyfund.org/goto/liamcahill