To share your memory on the wall of Ruth Cooper, sign in using one of the following options:

Print
WATERFORD Ruth A. Cooper, 78, of Hudson River Rd. died Sunday March 28, 2021 at Samaritan Hospital surrounded by her loving family. Born and educated in Troy she was the daughter of the late Michael and Dorothy Sieth Jackson.

Ruth was em... Read More
WATERFORD Ruth A. Cooper, 78, of Hudson River Rd. died Sunday March 28, 2021 at Samaritan Hospital surrounded by her loving family. Born and educated in Troy she was the daughter of the late Michael and Dorothy Sieth Jackson.

Ruth was employed for 27 years at the New York State Department of Motor Vehicles in Albany and retired in 2000. She was an auxiliary member of both the American Legion Mohawk Post 1450 in Halfmoon and the Veterans of Lansingburgh. She enjoyed crafting and cards but especially enjoyed spending time with her granddaughter Heather.

Ruth is survived by her loving husband of 56 years John C. Cooper Sr. and devoted son John C. Cooper Jr (Carol) of Waterford. She is the proud grandmother of Heather Cooper and is the sister of Dorothy Hayes and Eleanor Wanback of Melbourne, FL, Edward Jackson of Myrtle Beach SC and Michael Jackson (Kathy) of Troy, the late Genevieve Godlewski and Robert Jackson. She is the sister-in-law of Besty Jackson of North Carolina and is predeceased by her sister-in-law and best friend Joanne Jackson. Several nieces, nephews and cousins also survive.

Funeral services will be Thursday at 11 am at the Philip J. Brendese Funeral Home, 133 Broad St. (Rte.32), Waterford. Interment will be in St. Mary’s Cemetery, Waterford.

Relatives and friends may visit with her family at the funeral home on Wednesday from 4-7 pm.

As per pandemic regulations, masks are required, social distancing and occupancy limitations observed.

In lieu of flowers donations can be made to the Saratoga county Animal Shelter, 6010 County Farm Rd., Ballston Spa, NY 12020
Read Less

Receive notifications about information and event scheduling for Ruth

We encourage you to share your most beloved memories of Ruth here, so that the family and other loved ones can always see it. You can upload cherished photographs, or share your favorite stories, and can even comment on those shared by others.

Audra OConnell and Linda Zoller sent flowers to the family of Ruth A. Cooper (Jackson).
Show you care by sending flowers

Posted Mar 30, 2021 at 03:26pm
Jack, My sincere sympathy for the loss of your dear wife Ruth. She was a lovely and kind person. May memories fill your heart of the life you had together. Prayers to all the family.
Comment Share
Share via:
LZ

Posted Mar 30, 2021 at 09:19am
Our deepest sympathy to John of 56 years. Ruth is the sweetest woman I know and she will be missed soooo much. Love Linda & Paul Zoller

My sincere condolences in the passing of Ruth. You are all in my thoughts and prayers during this time of sorrow.
Comment Share
Share via:
NK

Posted Mar 30, 2021 at 07:32am
Ms Ruth was such a beautiful and loving woman.. She always treated us like her own.. she will be missed. Uncle John, Aunt Carol, Heather and Jack my prayers are with you all.. We love you ❤️
Comment Share
Share via: 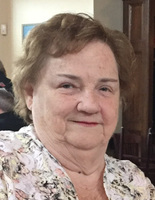