To share your memory on the wall of Robert Kennedy, sign in using one of the following options:

Print
CLIFTON PARK Robert Leo Kennedy passed away on Tuesday, March 23, 2021. A beloved husband, father, grandfather and great grandfather, he is reunited with the love of his life, Barbara, who passed away in 1988 from CADASIL.

Born March 14... Read More
CLIFTON PARK Robert Leo Kennedy passed away on Tuesday, March 23, 2021. A beloved husband, father, grandfather and great grandfather, he is reunited with the love of his life, Barbara, who passed away in 1988 from CADASIL.

Bob loved cars, camping, dancing, music and, most of all, his family. Known to many as Mr. Bob, he was “Pops” to his eleven grandchildren and seven great-grandchildren. He loved nothing more than to socialize, and could be found attending the many school plays, sporting events and concerts his grandchildren were involved as well as a frequent diner at Red Robin where the staff knew him and his order by name!

Bob is survived by his three sons, Brian (Renee), Michael (Michelle) and Todd (Venice) as well as his first cousins Kathleen Kennedy and Eileen (Ed) Cupolo to whom he was like a brother.

Relatives and friends may visit with his family at the Philip J. Brendese Funeral Home, 133 Broad St. (Rte.32), Waterford, Friday from 4-7 pm.

In lieu of flowers, the family would be grateful for donations to the Million Dollar Bike Ride to support CADASIL Research (online) at: http://givingpages.upenn.edu/conquercadasilkennedy or via check made payable to: Trustees of the University of Pennsylvania Penn Medicine Development and Alumni Relations, c/o Michael Kennedy, 37 Longview Dr., Clifton Park, NY 12065
Read Less

The Bette family sent flowers to the family of Robert L. "Bob" Kennedy.
Show you care by sending flowers

Posted Mar 26, 2021 at 10:28pm
Brian, Michael and Todd,
I’m so sorry to hear about your father’s passing. We all spent a lot of time together on Chestnut Lane growing up, and I remember that your father had a great sense of humor. My deepest sympathies, Chris Page
Comment Share
Share via:
MJ

Posted Mar 26, 2021 at 09:42am
Brian, Michael and Todd,
I am so sorry to hear of your dads passing. He was a great man and will remain so in our hearts. My thoughts and prayers go out to all of you. I am sorry that I am unable to attend the services but again please accept my condolences.
Manu Jaggi
Comment Share
Share via:

The Bette family purchased flowers and planted a memorial tree for the family of Robert Kennedy. Send Flowers

Posted Mar 25, 2021 at 04:48pm
Dear Michael, Brian and Todd So sorry to hear of your dads passing. The many good memories of his life are yours to remember and share. We had some good times when your parents lived on Chestnut Lane. Our deepest sympathy.
Sheila and Joe Page
Comment Share
Share via:

Thank you for the kind words. Growing up in our neighborhood was a lot of fun.
RB

Posted Mar 25, 2021 at 10:39am
Brian, Michal, Todd and families,
I hope you realize how much your Alpine family will miss the memories of Mr. Bob. There wasn’t anyone who knew him who didn’t like him. He was the glue that kept your family together. Stay together in his memory. He’s with your Mom now in healthy bodies. Dancing and having their happy hour. Our sympathy and prayers for peace to you all.
Gary and Rosemary
Comment Share
Share via:

Thank you for the kind words. You are correct that he was the glue, and we all have wonderful Alpine Memories. It was a great place to grow up. 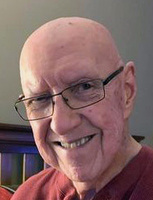