To share your memory on the wall of Jean Decker, sign in using one of the following options:

A Memorial Mass will be held at a later date.

Receive notifications about information and event scheduling for Jean

Print
A Memorial Service will be held at a later date to be announced.

We encourage you to share your most beloved memories of Jean here, so that the family and other loved ones can always see it. You can upload cherished photographs, or share your favorite stories, and can even comment on those shared by others.

Posted Mar 30, 2021 at 12:18pm
I have waited a while to memorialize my mother. We are so much alike, and different! She taught me how to do so many life skills. How to garden, how to cook, which I did for the family since I was about 13. How to can and preserve food from home grown produce. Some of my favorites are her old time favorites. Chili sauce, both mild and hot. Oh the good times doing up the hot batches! Sneezing, choking, runny noses crying eyes, I don’t think we ever mastered the “safe way.” I made andfroze a ton of produce. She would come to NH on weekends to make and freeze pies! She loved to play card and board games! Not as much when my kids would surround her while playing UNO. She was frequently the recipient of draw 2, draw four, reverse and skip. She would just bow her head and shake it. Pinocle was as another of her favorites., as was scrabble and cross word puzzles. Some of her other loves, family picnics, holidays, trips to Canada to see Fr. Laurent, she relished those visits. I could go on and on about my mother she was a formidable woman, loved by many. I love and miss you mom.
Comment Share
Share via:
MW

Posted Feb 06, 2021 at 03:49pm
The nearly two feet of snow we got this weekend reminded me of how much my mom loved the snow; the deeper the better, especially during Christmas. She didn't ski, wasn't interested in snowmobiling, and tolerated shoveling and snow-blowing, but always got excited whenever a Nor'easter was predicted for our area. I remember when my brother, sister and I were very young, mom introduced us to “sledding”. She built us a 3-4 foot snow-slide in our flat backyard, slicked it down with water to create an icy surface, and found a large, flat piece of cardboard that glided down that slide faster than a silicone-sprayed saucer. (or so it seemed to me!) She built us snowmen taller than us and showed us how to make snow angels. Later, as we got older, play became rougher as she engaged us in snowball fights and taught us how to drive in snow and on ice. Unlike my mom, I hate the snow and the cold; but thanks to mom, our kids sledded down snow-slides built on a foundation of steep deck stairs, built snowmen, made snow angels and won many snowball fights. Love you Mom!

Posted Dec 31, 2020 at 09:18am
I am sorry for the loss of your mother and friend. I worked with Jean at the Department of Labor nearly 30 years ago. We sat side-by-side for the year I worked in her office. Three things I remember about your mother. One, her kindness. To, her devotion to our Blessed Mother. Three, her zucchini bread baked in a coffee can!

Jean gave me Instructions on saying the rosary and urged me to pray to our Blessed mother and I never forgot that, or fail to think of Jeannie when I pray. God bless your family. You are in my thoughts and prayers.

Posted Dec 27, 2020 at 05:19pm
I am so sorry for your lose and our whole family. She was always very special to me and I will always remember my cousin. My thoughts and prayers are with you all. Love Cousin Marion
Comment Share
Share via:
SB

Posted Dec 27, 2020 at 09:40am
to Margaret, Marion, Marie and Stephen. I am so sorry to hear about your sister/mom. I remember knowing her from way back when her sister Helen married my brother Art. her family also lived next door and we had many conversations over the years she lived on Harris road. my love to all of you.
Shirley Bold
Comment Share
Share via: 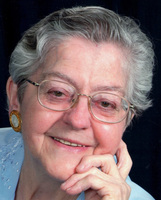